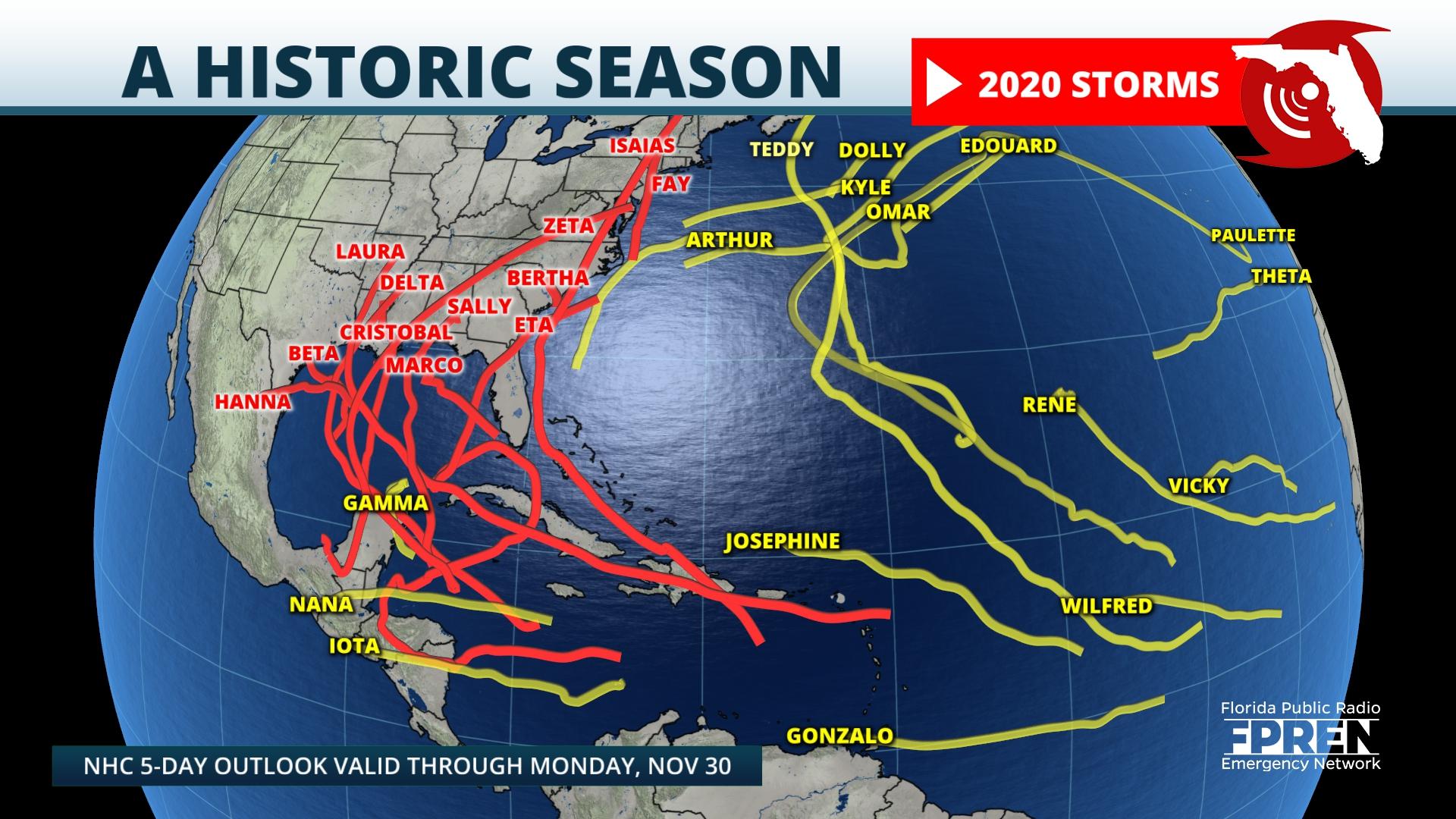 The 2020 Atlantic Hurricane season was nothing short of historic, and many coastal residents are thankful the record-breaking season has come to a close.

Activity began early again this year, with Tropical Storms Arthur and Bertha forming in the month of May. Cristobal was the third name storm of the year, and it formed on only the second day of the season (June 2). Cristobal was the first of 27 named storms this year that set a record for the earliest formation date in a calendar year.

The 2020 season was filled with 30 tropical storms, 13 of which became hurricanes, and 6 achieved major hurricane status (Category 3 or higher on the Saffir-Simpson Hurricane Wind Scale). An average hurricane season typically produces 12 named storms, of which six become hurricanes and three major hurricanes. 2020 was the second season to use the Greek alphabet naming system, and it was the most active season in the Atlantic Basin since records began in 1851.

Of the 30 named storms, 22 total landfalls were recorded across the whole Atlantic. 12 of those made landfall in the contiguous United States, breaking the prior record of nine set in 1916. The Gulf Coast may have received the brunt of the direct hits this year, however, no coastline was spared from the threat of tropical cyclones. According to the National Weather Service Corpus Christi, tropical storm or storm surge watches and warnings were issued for every mile of U.S. coastline along the Gulf of Mexico and Atlantic Ocean.

September was the most active month on record in the Atlantic, with 10 named storms occurring that month. The season also featured a total of 10 tropical cyclones which underwent rapid intensification, tying it with the 1995 Hurricane Season. 2020 was the fifth consecutive above-average hurricane season and the first extremely active season since 2017.

Louisiana was hit the hardest, with five total landfalls this season, which is also a record. Category 4 Hurricane Laura impacted the state in late August, becoming the strongest tropical cyclone on record in terms of wind speed to make landfall in Louisiana, alongside the 1856 Last Island Hurricane.

These are only a handful of records that the 2020 Hurricane Season achieved and meteorologists attribute this unprecedented activity in part to an ongoing La Niña.

November 30th may mark the official end to the hurricane season, however that does not mean tropical cyclones follow this schedule. The National Oceanic and Atmospheric Administration currently defines the hurricane season as occurring between June 1st and November 30th each calendar year, which is when 97% of all Atlantic tropical cyclones occur.

Although the season came to a close Monday, meteorologists are continuing to watch an area for potential development over the far eastern Atlantic towards Europe. This broad area of low pressure could acquire subtropical characteristics over the next few days as it meanders to the north of the Canary Islands. Environmental conditions are forecast to become unfavorable for further development but at this time the system has a moderate chance for further development. If the storm develops it will be the 32nd cyclone and given the name Kappa if it achieves Tropical Storm status.

1. A gale-force, non-tropical low pressure system is centered between the Madeira Islands and the Azores. This system has become less organized during the past 24 hours, and environmental conditions are expected to become less conducive for development as the system moves southwestward during the next day or two. Although subtropical development is now unlikely, this system will continue to produce strong winds and locally heavy rains in the Madeira Islands and the Azores through Wednesday. Additional information on this system can be found in High Seas Forecasts issued by Meteo France.