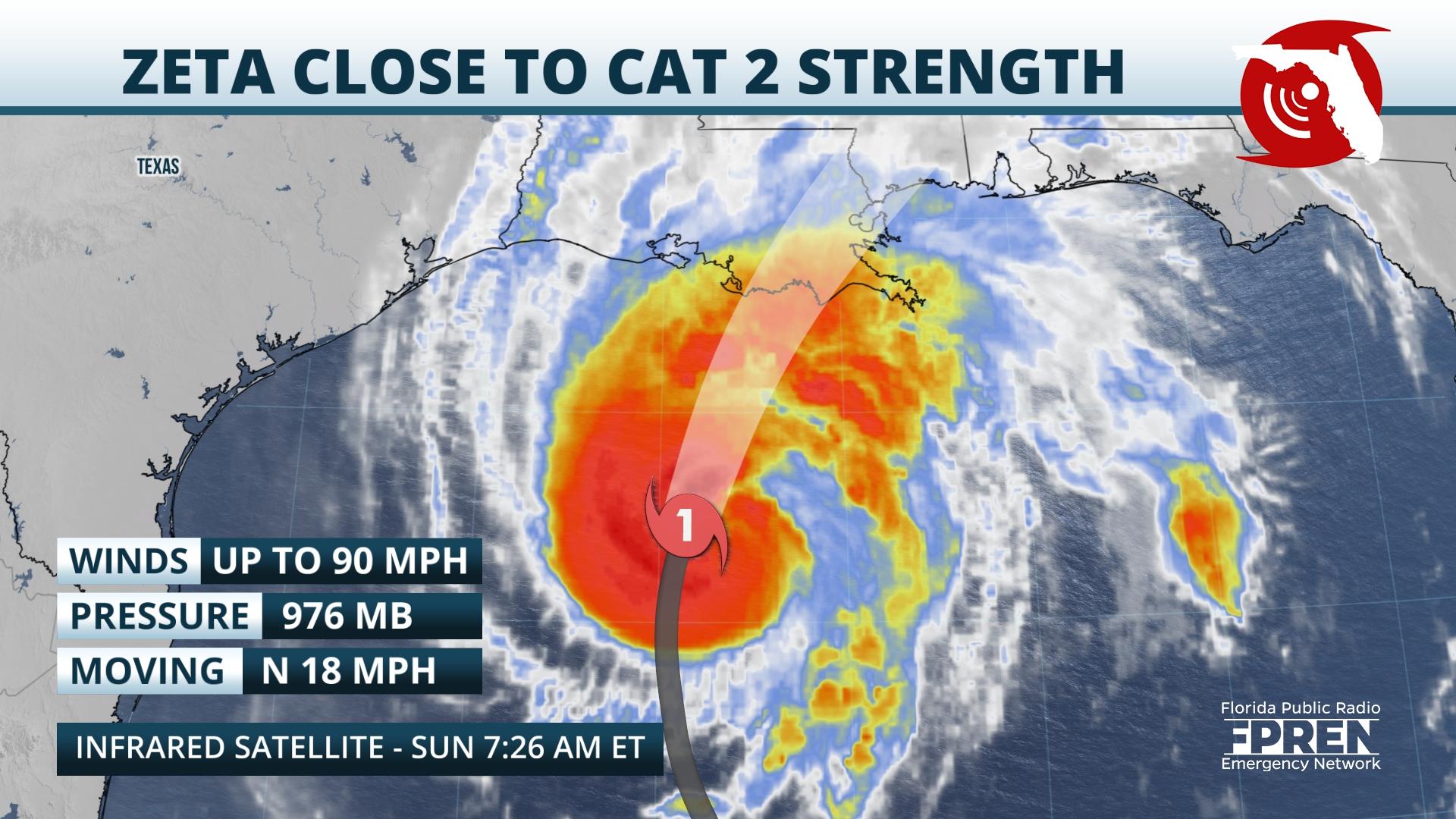 Zeta regained hurricane strength early Wednesday morning over the warm waters of the central Gulf of Mexico. It is forecast to strengthen more and may attain category 2 status prior to landfall along the Louisiana Gulf coast late Wednesday afternoon.

1. Strong, damaging wind gusts, which could cause tree damage andpower outages, will continue to spread eastward across portions of the Carolinas and southeastern Virginia through this afternoon due to Zeta's fast forward speed.

2. Through today, heavy rainfall is expected near and in advance of Zeta from portions of the Ohio Valley, into the central Appalachians and Mid-Atlantic. This rainfall may lead to flash, urban, small stream, and isolated minor river flooding.

There are no coastal watches or warnings in effect.

Key messages for Zeta can be found in the Tropical Cyclone Discussion under AWIPS header MIATCDAT3, WMO header WTNT43 KNHC, and on the web at www.hurricanes.gov/text/MIATCDAT3.shtml.

WIND: Damaging winds, especially in gusts, will continue to spread across portions of eastern North Carolina and southeastern Virginia through this evening.

RAINFALL: Areas of heavy rainfall, both in advance of Zeta and along the track of Zeta, will impact areas from the central Appalachians, MidAtlantic and lower to middle Ohio Valley through Thursday. Rainfall totals of 1 to 3 inches are expected across these areas, resulting in possible flash, urban, small stream, and isolated minor river flooding.

TORNADOES: A tornado or two is possible this afternoon across the Carolinas and southern Virginia.

At 200 PM EDT (1800 UTC), the center of Tropical Storm Zeta was located near latitude 37.8 North, longitude 78.2 West. Zeta is moving rapidly toward the eastnortheast near 53 mph (85 km/h). An even faster motion toward the eastnortheast is expected tonight and on Friday. On the forecast track, the center of Zeta will continue to move across Virginia this afternoon, and emerge over the western Atlantic by this evening.

Maximum sustained winds are near 50 mph (85 km/h) with higher gusts. Some strengthening is forecast once Zeta moves over the western Atlantic, but the cyclone should become absorbed by a frontal system by Friday night.

Tropicalstormforce winds extend outward up to 275 miles (445 km) mainly to the southeast of the center. A sustained wind of 51 mph (82 km/h) and a gust to 72 mph (116 km/h) were recently reported at a station in Conway, North Carolina, to the east of Roanoke Rapids.

Zeta continues to move rapidly over land, and its maximum sustained winds are estimated to be near 45 kt over the southeastern quadrant, with thew highest winds occuring over elevated locations. The wind gust factor continues to be higher than usual due to the interaction with land.Zeta continues to accelerate northeastward and is now moving near 055/42 kt. The cyclone should accelerate some more ahead of a strong 500-mb trough moving into the eastern United States over the next day or so. The official track forecast is in reasonable agreement with the global model predictions.

The pressure pattern of Zeta is becoming distorted, and starting to take on an extratropical appearance as the cyclone begins to interact with a nearby frontal system. By this afternoon, the global models indicate that the system will become a frontal low and thus extratropical. Some short-term baroclinic strengthening is possible over the western Atlantic, but the guidance suggests that the system will become absorbed into the frontal zone in 36 hours or so.

Tropical storm force winds are expected to arrive along the Gulf coast from Louisiana to the western Florida Panhandle between mid-afternoon and sunset Wednesday, before subsiding in the hours prior to dawn on Thursday. Hurricane force winds are most likely in the hurricane warning area over Louisiana and Mississippi early Wednesday evening.

The rain and wind tied to Zeta is forecast to arrive in Northwest Florida between 2 and 5 PM, with the worst of the weather between 8 PM Wednesday and 3 AM Thursday.

During this time, frequent tropical storm force wind gusts and occasional tropical storm force sustained winds are likely from Pensacola to Destin and Fort Walton Beach. A cold front following Zeta may bring a separate round of scattered thunderstorms over the Florida Big Bend region, including Tallahassee, Perry, and Lake City during the daylight hours of Thursday. Strong winds throughout the atmosphere and daytime heating may result in a couple of strong storms with a brief, isolated tornado threat. The scattered showers and storms are expected to weaken shortly after sunset Thursday as they approach Northeast and North-Central Florida, including Jacksonville and Gainesville.

Strong onshore winds are expected to pile water on to the coast. Storm Surge Warnings continued from the Atchafalaya River, Louisiana to Navarre, Florida. 6 to 9 feet of water above normally dry ground is possible along the Mississippi and Alabama coastlines, which are particularly storm surge zone. Water levels as high as 2 to 4 feet are possible into the western Florida Panhandle, especially near the time of high tide within a few hours of midnight. Minor water level rises are anticipated as far east as the Forgotten coast, where Coastal Flood Advisories have been posted.

The storm’s fast forward motion is expected to spread tropical storm force wind gusts well inland over Mississippi, Alabama, and Georgia early Thursday morning. These winds are capable of producing power disruptions to areas far away from the coast. Pockets of flash flooding are possible, but the quick movement of the storm should limit total rainfall amounts to around 1 inch in the western Florida Panhandle to as high as 2 to 4 inches in a swath from southeast Louisiana to Mississippi, Alabama, north Georgia, and the Upstate of South Carolina.