Summer is Over, but Hurricane Season is Not

The Autumnal Equinox occurred Friday, September 22 at 4:02 pm EDT. This was when the sun crossed over the celestial equator and we welcome fall to the Northern Hemisphere. On the Equinox, there are equal hours of daylight and darkness, but the days grow shorter and the nights longer as the sun moves toward the southern hemisphere for the winter solstice.

Explanation of the effect of the equinox on a sunset.

Much of Florida will experience a hint of fall weather next week as dry, continental air will be brought in by winds on the backside of Hurricane Maria. Days will still be warm, but nights will be more comfortable thanks to the lower humidity. Rain chances will also be low in most areas, which is welcome news for those still attempting to dry out and clean up from Hurricane Irma.Just because air temperatures and humidity may be dropping slightly over land in the coming weeks, ocean temperatures are still warm enough to support tropical storm activity. In fact, according to climatology, there is a second peak in storm frequency during the early weeks of October. 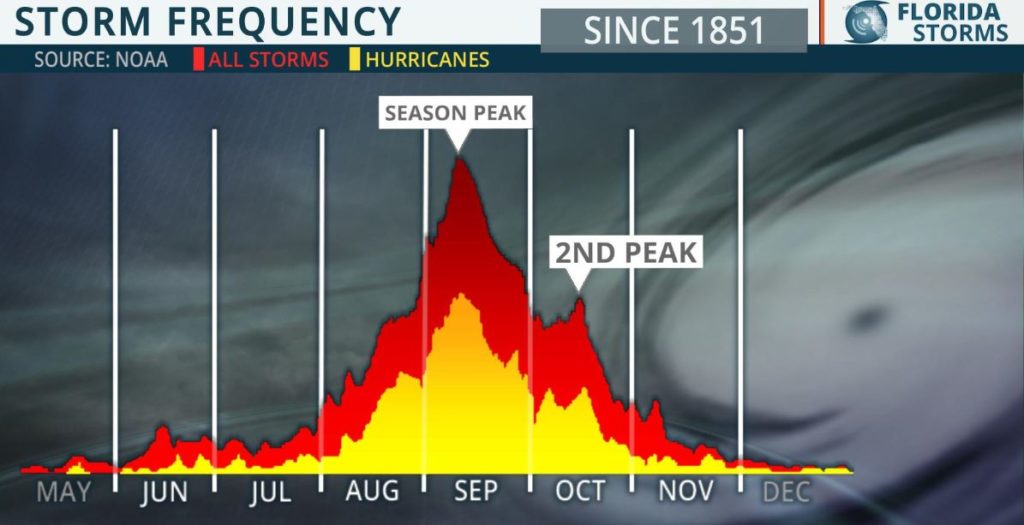 Since 1851, there have been notable trends in where tropical cyclones develop from late September to October.  During the season’s traditional peak, tropical storms tend to form anywhere across the Atlantic, Caribbean or Gulf of Mexico.  By early October, storm origins are heavily weighted in the western Caribbean. Typical storm paths from this location usually include the Gulf of Mexico or western Atlantic, leaving Florida vulnerable to a direct hit.

In the wake of Hurricane Maria, Post-Tropical Storm Jose, and Tropical Depression Lee, the Atlantic Basin is projected to be quiet for about a week. The National Hurricane Center says no new storms are likely to form in the next five days. Long range data does suggest, however, that the there will be an increase in convective activity in the western Caribbean during the first week of October.  Therefore, it should be no surprise if a new depression or storm forms in this region in 10 to 15 days.