Update as of 5 pm Wednesday: Fred was reported to still be a tropical storm, based largely on an areas of thunderstorm activity to the southeast of its center. However, satellite and radar data suggests the storm is becoming less organized as it passes over the mountainous terrain of the Dominican Republic. As of 500 pm EDT Wednesday, Tropical Storm Fred was located 75 miles WNW of Santo Domingo Dominican Republic and moving WNW at 15 mph. Maximum sustained winds were up to 40 mph, and the storm's minimum central pressure was 1007 mb.

The track and intensity forecasts for Fred has changed very little in recent advisories from the NHC, but forecasters have noted some divergence in the longer range model simulations. This is largely related to how close the center of the storm may pass to the island of Cuba Thursday and Friday, and whether it will move over warmer ocean water or near mountainous land areas. Stronger winds aloft are also projected to influence Fred's circulation some as it moves closer to the Straits of Florida Friday, then into the southeastern Gulf of Mexico Saturday. For these reasons, confidence in the forecast for Fred after 72 hours remains "lower than normal".

Update as of 11 am Wednesday: Tropical Storm Fred was nearing the eastern Dominican Republic and had strengthened slightly, according to morning satellite imagery and NOAA Hurricane Hunter aircraft reports. There were no significant changes to the overall track or intensity forecasts with Fred. However, in the "key messages" issued with the 11 am advisory, forecasters have noted that there is an "increasing risk" of wind and rainfall impacts from Fred across Florida, beginning Friday night in the Keys and spreading northward through portions of the Peninsula and Panhandle Saturday through Monday.

Update as of 8am Wednesday: Fred is nearing landfall on the Dominican Republic. It is about 50 miles southeast of Santo Domingo as of the 8am advisory from the Hurricane Center with top sustained winds near 40 mph. Its west-northwestward motion at 16 mph should bring the center of circulation over Hispaniola later Wednesday, near the Turks and Caicos Islands and southeast Bahamas on Thursday, and near or just north of the north coast of Cuba on Friday. 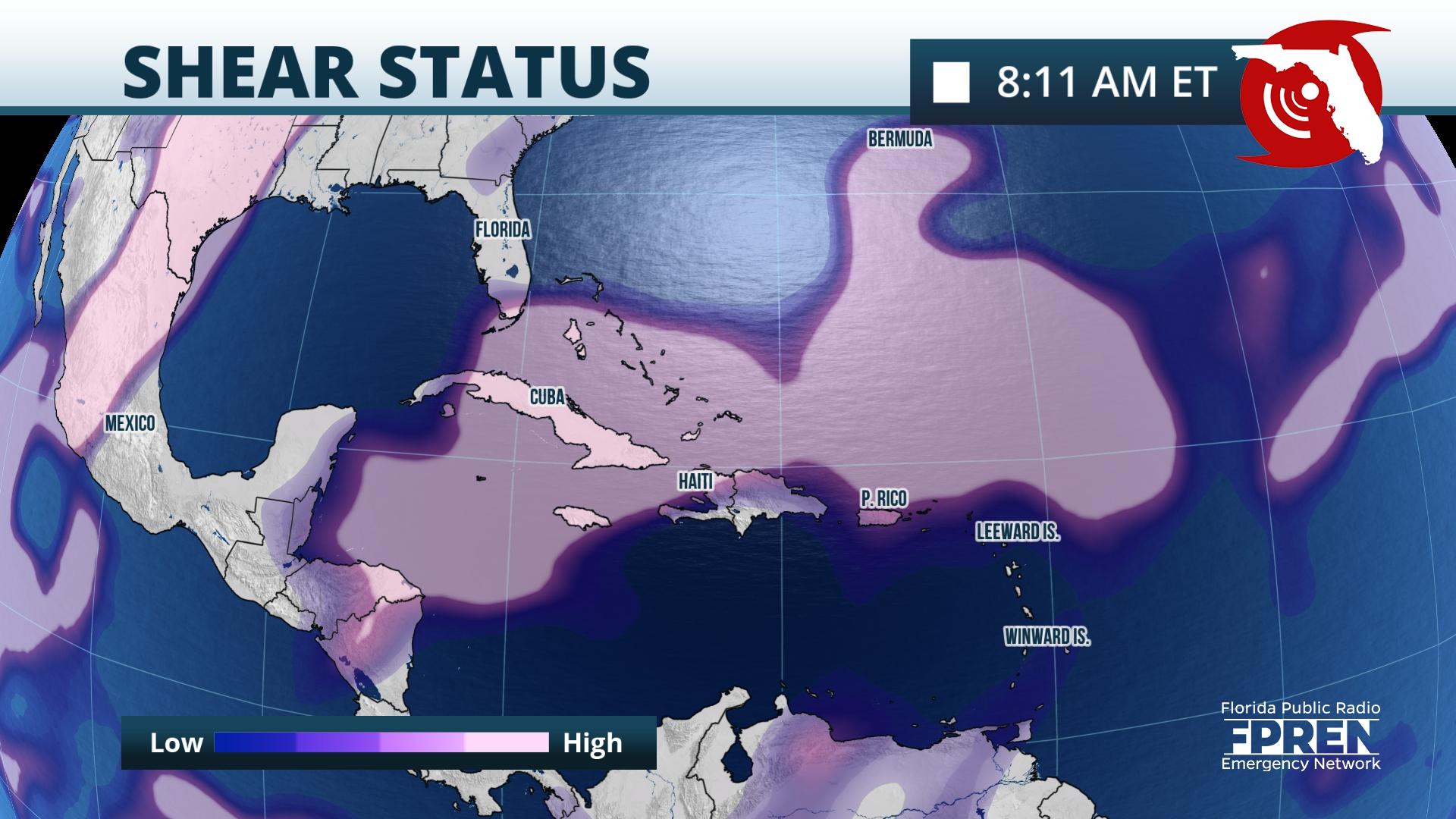 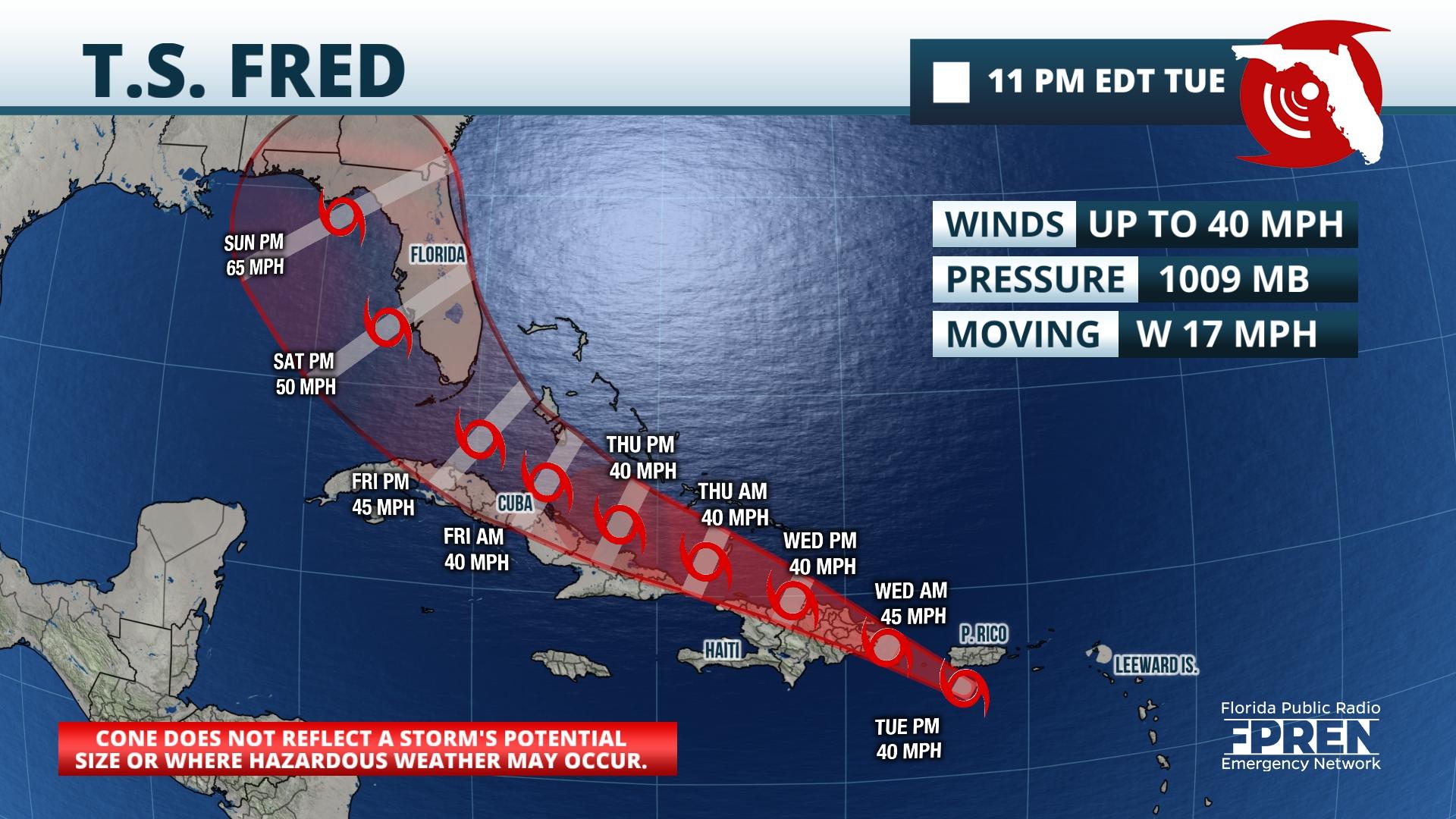 null,Its interaction with mountainous Hispaniola, along with dry air and increasing southwesterly wind shear, are all likely to cause Fred to weaken later Wednesday into Thursday. There is some chance that Fred will find a more favorable environment for strengthening near Florida over the upcoming weekend, if the circulation can stay over water.

Original story from 11 PM Tuesday: The disturbance in the northeast Caribbean was upgraded to Tropical Storm Fred late Tuesday evening just south of Puerto Rico. The storm has the potential to affect a large portion of Florida this weekend with heavy rain and high winds, although the National Hurricane Center says the "magnitude, location and timing of those impacts are still uncertain".

As of 11 pm EDT Tuesday, Tropical Storm Fred was located 45 miles south-southwest of Ponce, Puerto Rico and had maximum winds of 40 mph. The storm was moving west at 17 mph and a minimum central pressure was estimated to be 1009 mb.

null,Tropical Storm Fred is forecast to pass just south of Puerto Rico and turn west-northwest into the Mona Passage Wednesday. It will then likely move across the Dominican Republic and along the north shore of Haiti Thursday, before paralleling the north shore of Cuba Friday. Thereafter, Fred is forecast to move through the Straits of Florida and into the southeastern Gulf of Mexico, before turning north and potentially affecting parts of Florida's Gulf Coast this weekend.

A marginally favorable atmospheric environment surrounds Fred over the next 24 hours, which could allow for some intensification. However, this may be limited by interactions with the mountainous island of Hispaniola which could disrupt the storm's low-level circulation. At this time, stronger winds aloft form the west may also aid in the weakening of the storm temporarily. From there, how close the track of Fred's circulation is in relation to Cuba will play a key role in determining the storm's ability to maintain intensity through the Straits of Florida Friday. Thereafter, a more favorable oceanic and atmospheric environment is projected near Tropical Storm Fred this weekend when it emerges in the southeastern Gulf of Mexico and makes the more northward turn. However, this intensification would be contingent on the center staying over water and not moving across the Florida Peninsula.

It should be noted that the average forecast track errors on a storm at days four and five are 175 and 200 miles, respectively. This is why the entire State of Florida is at risk for some impacts from Tropical Storm Fred at this time. All residents of Florida are encouraged to stay vigilant in the coming hours and days as more information on the potential impacts from Tropical Storm Fred become available. Forecasters have noted that hurricane conditions can not be ruled out if the storm were to stay over water longer before making landfall somewhere in Florida late this weekend or early next week.