The storm report (box lower left) says it all. Flash Flood Warning extended until midnight local time for parts of #Gulf #Bay and #Calhoun counties. This includes #PanamaCity and #MexicoBeach.

Flooding was reported in parts of Bay, Gulf and Calhoun counties Wednesday afternoon, where a Flash Flood Warning was issued, then extended until midnight local time.

The risk of flooding and isolated tornadoes will continue across Florida's Big Bend, Nature Coast and inland areas of North Florida through Thursday.

Original story published Wednesday morning: No strong tropical systems are affecting Florida, but impacts from a disturbance in the Gulf and Hurricane Larry well offshore are making their presence known.

Heavy rain from what forecasters are calling Disturbance "91L" have prompted Flash Flood Watches for portions of the Florida Panhandle and Forgotten coast Wednesday through Thursday morning. 2 to 4 inches of rain, with local amounts between 5 and 7 inches, may cause flash flooding in areas where it comes down heavily in a short period of time. A few strong wind gusts or isolated tornadoes are also possible. 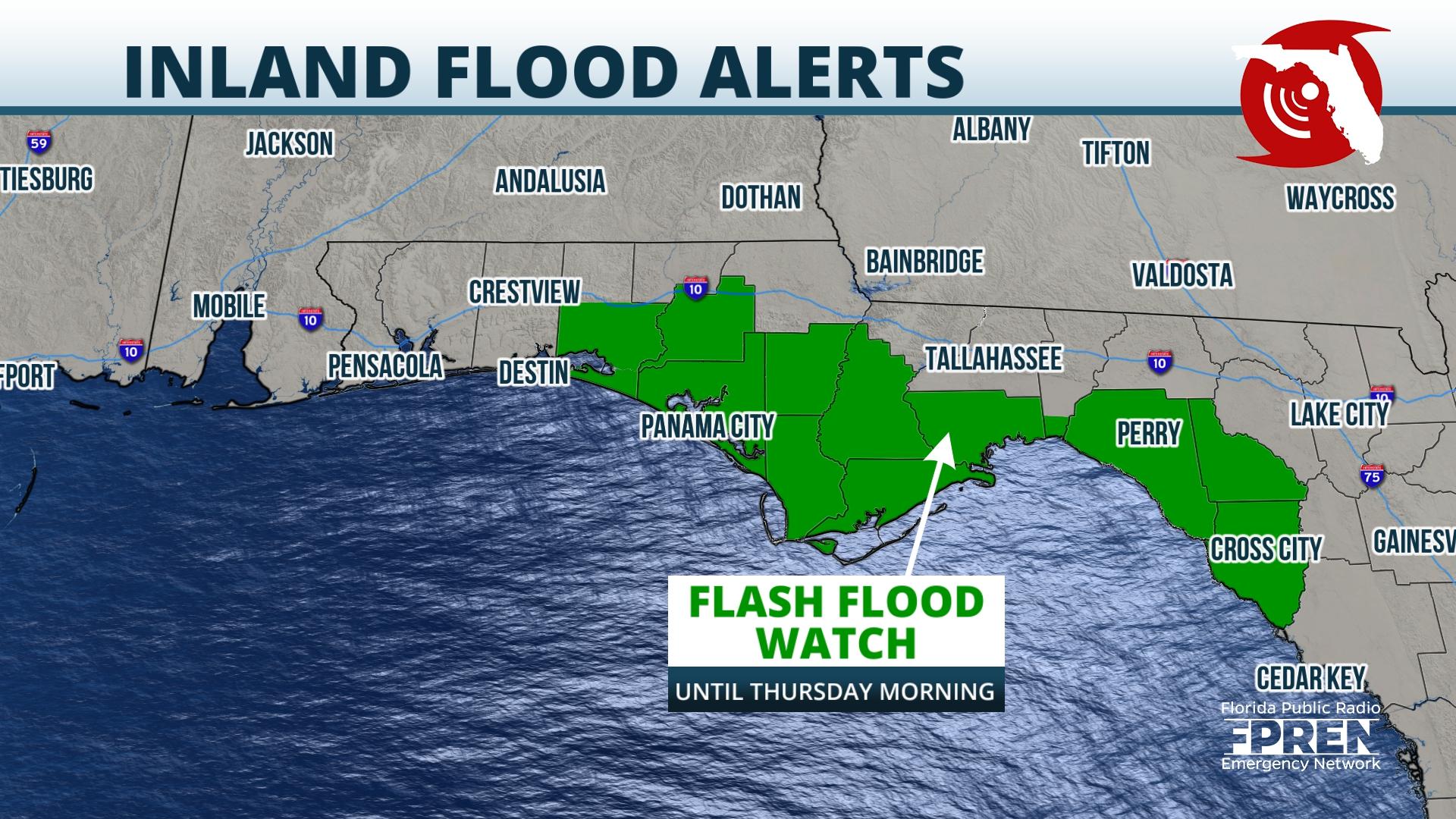 The National Hurricane Center says there is still a chance it could become a tropical or subtropical depression or named storm before moving inland over the Florida Panhandle Wednesday evening. The presence of the disturbance will enhance southwesterly winds over much of the Florida Peninsula, causing widespread showers and thunderstorms favoring the Gulf side of the peninsula Wednesday night and Thursday morning and the interior and Atlantic side of the state Thursday afternoon and evening.

"91L" will have a second opportunity to develop off the South Carolina coast on Thursday and Friday. Regardless of development, it is likely to generate showers near the coast, along with rough water conditions and minor coastal flooding near the time of high tide around Charleston. The disturbance is expected to head out to sea over the weekend, with little additional impact on the U.S. coastline over the upcoming weekend.

Hurricane Larry weakened slightly to a category 2 hurricane about 500 miles southeast of Bermuda as of late Wednesday morning. Its large size has already generated swell that is reaching the east coast of the United States. There is a moderate to high risk of rip currents along many Atlantic beaches Wednesday, which is expected to last through Friday before conditions improve over the weekend. The center of Larry is expected to pass east of Bermuda, but a Tropical Storm Warning is in effect for the island because of the expansive area of tropical storm winds that are likely to still reach the island on Thursday.

Another area of disturbed weather is expected to emerge from Africa this weekend. It could develop near the Cabo Verde Islands late this weekend or early next week.