Heat wave returns to the Sunshine State this week

It’s the first day of astronomical summer, and temperatures are about to heat up across the Southeastern United States. The second heat wave over the course of two weeks is slated to arrive to most of Florida by Wednesday.

Last week, Floridians experienced the first substantial heat wave of the year. From the Panhandle to portions of South Florida, heat indices hovered in the lower 100s for several days. Over the weekend a mid-level high pressure ridge, responsible for last week’s excessive heat, retreated to the Mississippi Valley and the Upper Midwest. This feature has since nudged its way back eastward, and as of Tuesday morning, its eastern periphery had edged into the Florida Panhandle. Over the next few days, the ridge is expected to continue strengthening over the interior and eastern United States, leading to another heatwave for the Southeast.

Temperatures on Tuesday afternoon are expected to remain near average over most of the Sunshine state, in the upper 80s and low 90s. The exception is over the Panhandle, where high pressure has already begun to build. Highs in the Pensacola area on Tuesday afternoon could reach the mid to upper 90s. By Wednesday, the ridge will build farther eastward. Afternoon temperatures are forecasted to peak in the upper 90s across the northern half of the Sunshine State, the low 90s over Central and South Florida.

Through at least Wednesday evening, a relatively dry airmass is expected to remain draped over most of the state. Although this will limit cloud cover and the chance for cooling afternoon rainfall, it will also detract from oppressive heat index values, which are based on humidity levels and apparent air temperatures. 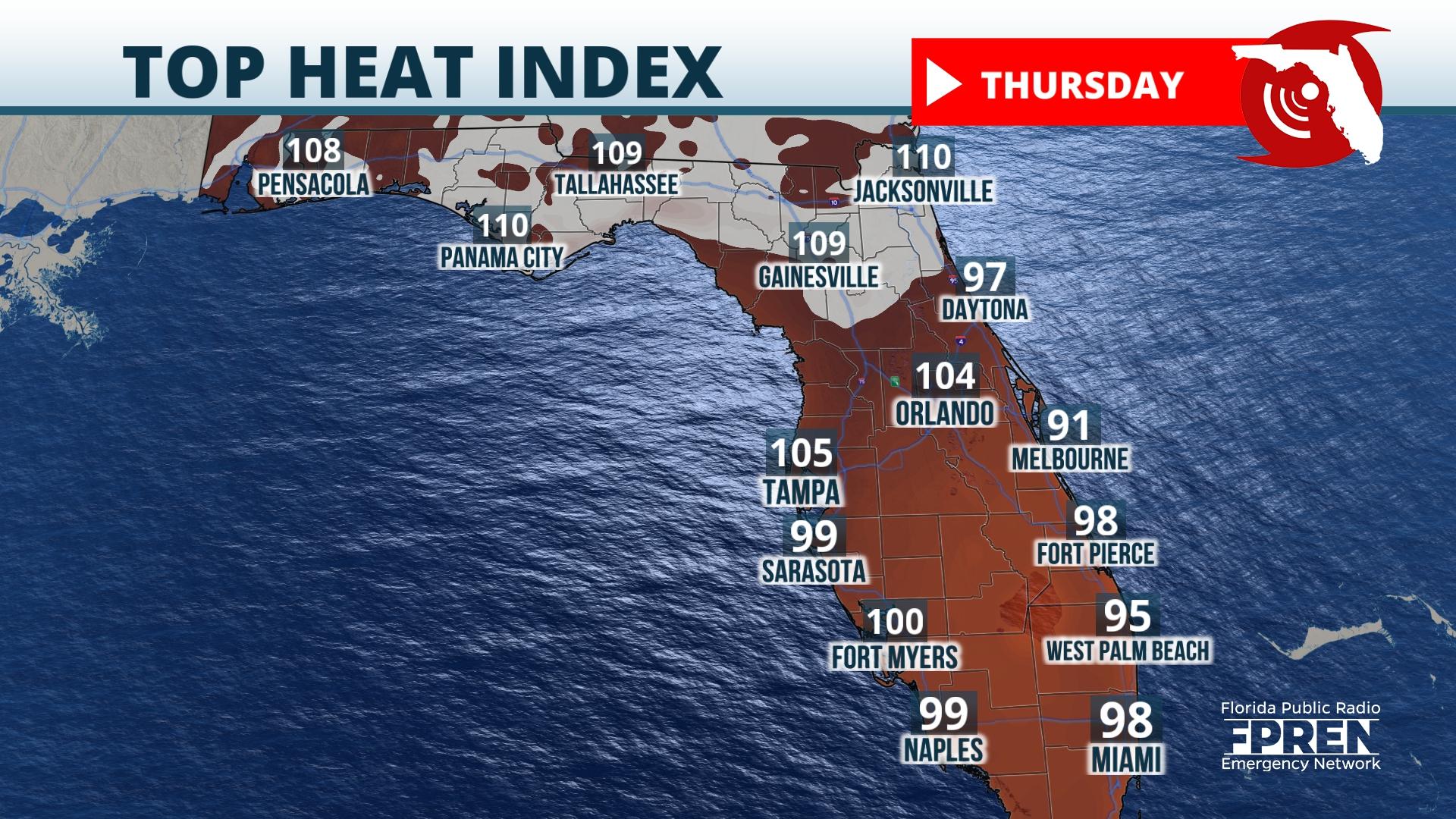 ,By the end of the workweek, the dry pocket should erode, and humidity levels will surge. Highs from Central Florida northward are expected to reach the mid to upper 90s, and heat indices, the lower 100s. South Florida, much like last week, should remain far enough away from the center of mid-level high pressure that highs will not climb much higher than 90 degrees. Heat indices over South Florida, however, should reach the upper 90s through at least Saturday.

By the start of next week, mid-level disturbances should weaken the ridge and push it westward. At the same time, a surface cold front is expected to approach Florida from the north. As a result, temperatures across the state should return to near seasonable levels.