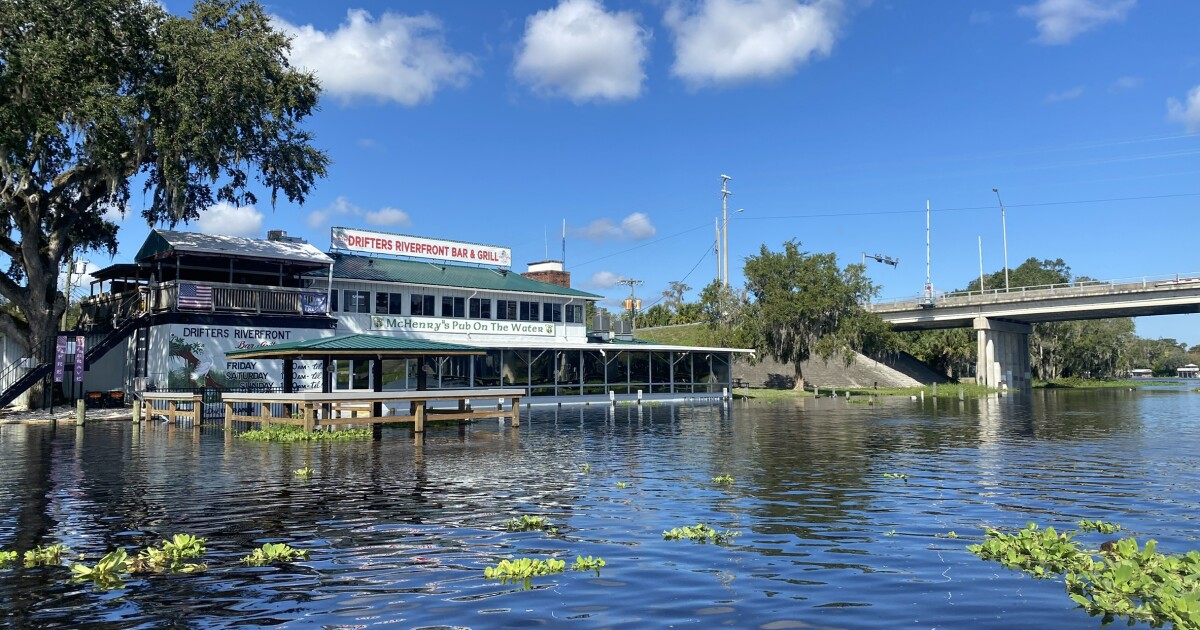 Flooding on St. John’s River is likely to continue into its third month, according to the National Weather Service in Melbourne and NOAA’s Southeast River Forecast Center. The river has been in flood stage since early October, shortly after Hurricane Ian brought significant rainfall to the state, with up to 15 to 21 inches of rain to the affected area of the St. John’s.

The flooding is particularly poor upstream, with the worse conditions having been observed between Lake Harney and Astor. As of publishing, Lake, Volusia, and Seminole Counties all continue to have active flood warnings.

This prolonged emergency along the river has been historic, said Jessie Smith, a meteorologist at NWS Melbourne. She said flooding reached record levels in four of the office’s forecast points: Lake Harney, Sanford, Deland and Astor.

Hamill said the St. John’s at Astor, the furthest downriver, had not crested so high since 1933.

Though the river has fortunately fallen below major flood stage, the highest level of alert, the NWS continues to issue flood warnings twice a day until the river finally falls below flood stage.

Riverside communities, like Astor, are continuing to feel these effects every day. Smith said homes, businesses, roads and yards in this area are still experiencing flooding, with waters very slowly receding. Smith said unlike in a storm surge scenario, water from river flooding may take much, much longer to recede depending on the conditions of the river.

“You may have a foot and a half of water in your home, and it’s not going anywhere,” she said.

Smith said it is still unclear just how much water drained into the St. John’s between Ian and Nicole.

“Unprecedented and historical is the best way to describe it,” she said.

The St. John’s River’s naturally drains very slowly. Smith likens it to a lazy river at an amusement park, slowly flowing from its headwaters in Indian River County to where it finally lets out into the Atlantic in Jacksonville.

Smith said generally, it takes about two weeks for the river to drain to a normal stage. At this point, the river is up to months in a flood stage.

One of these reasons for this slow drainage is Florida’s flat terrain, which Smith said only changes about 30 feet in elevation from the start to the end of the river.

The St. John’s specifically is unusual in that it runs south to north.

Hamill gave this example as well: though a foot of water may not sound like a lot, a foot of additional water in a river will spread out quite far because of Florida’s flat topography. There’s not much elevation to hinder floodwaters.

Ashley Evitt, the media outreach manager for the St. John’s River Water Management District, said Florida’s natural wetlands and floodplains act as natural sponges for rainfall, which the District manages almost 800,000 acres of. It is also responsible for 12 major water control structures upstream and 115 miles of flood control levees that the District manages with the U.S. Army Corp of Engineers.

However, she stresses that there are limits to what their systems can manage. Limits that were met by the impacts of Ian and then Nicole.

In addition to rainfall, Evitt said that high tides and westerly winds pushed ocean water up the river, causing flooding to the lower basin.

It’s the responsibility of county and local governments to respond to flooding in towns and cities, Evitt said, in cooperation with the District and the Florida Department of Environmental Protection.

Smith hopes that amid the record-setting floods, the people in these areas are not forgotten.

“Ian may be gone and out of our minds, but there are still communities feeling major impacts from the storm,” Smith said.