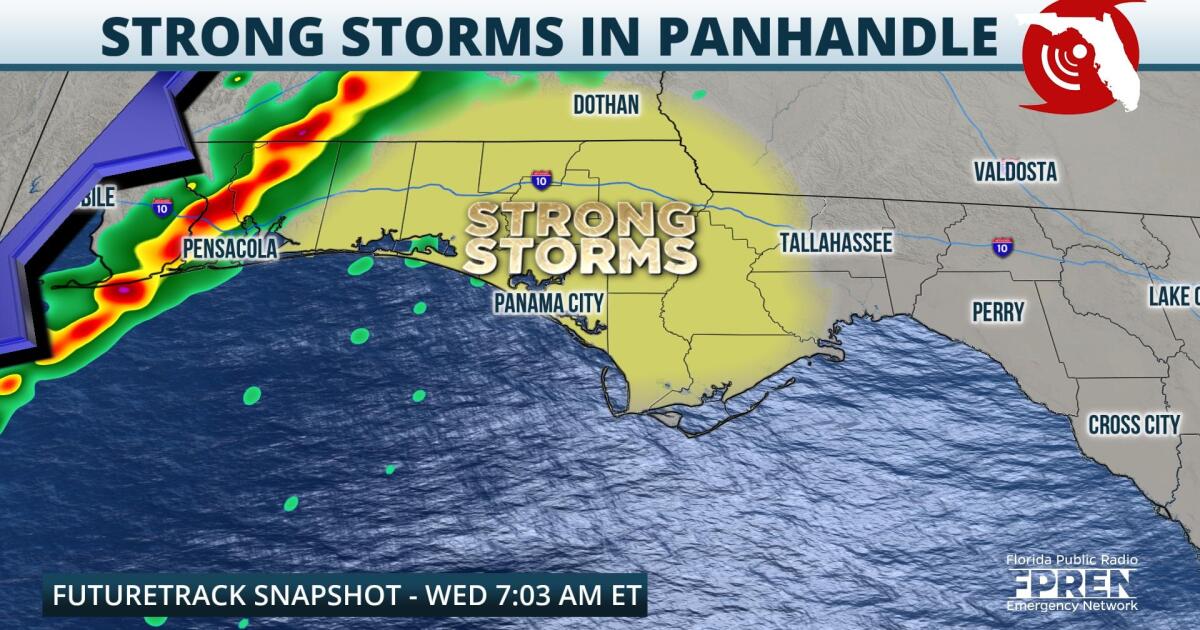 A dynamic system is expected to bring the risk of damaging winds, large hail, and even tornadoes to the Panhandle Tuesday.

Surface analysis Monday afternoon depicts a deepening low pushing into the Great Plains, prompting the issuance of both winter storm and ice storm alerts in the Midwest. In the warm and unstable sector of this low, severe weather is possible Monday in the southern Plains and Lower Mississippi River Valley, especially from Dallas-Fort Worth to Memphis. That severe weather threat is forecast to shift eastward by Tuesday, impacting locations from Birmingham, Alabama, to New Orleans. Severe storms will be possible as far east as the Panhandle Tuesday as dew points and instability rise across the Panhandle. The increasing severe weather parameters ahead of the line of thunderstorms will provide extra energy to storms that arrive in the Panhandle Wednesday.

Forecast models suggest a broken line of thunderstorms will move into the Panhandle after sunset Tuesday, likely between 10 p.m. and 4 a.m. Wednesday. The atmospheric setup supports the risk of damaging winds in excess of 60 miles per hour and large hail of an inch in diameter. Upper-level winds will be changing direction and wind speed with height, which could promote the development of a few supercells capable of producing tornadoes. As the cold front pushes east Wednesday, the risk of severe weather will gradually shift east into the Big Bend region of the Florida Panhandle. Storms are forecast to gradually outrun their source of fuel, leading to a gradual weakening trend in the progressive line of thunderstorms. Despite that, the potential for damaging winds will persist as the broken line of thunderstorms pushes into North Florida.

There is the potential for watches and warnings Tuesday into Wednesday. If a watch is issued, it means that the ingredients for severe weather or tornadoes are present in the atmosphere. Watches are typically issued before the weather turns severe and tend to cover a fairly large geographic area for several hours. A warning on the other hand is issued when severe weather is ongoing for a specific location and is typically on a smaller geographic scale, typically covering only a few counties at a time. As a reminder, the severe weather season in the Sunshine State typically does persist through the winter months. This is especially true along the Gulf Coast where powerful cold fronts can sometimes spark stronger storms.

Following the severe weather risk through midweek, a significant cooldown is expected across the Panhandle and North Florida. Highs by the first full weekend of 2023 will fall into the upper 50s and lower 60s across the northern half of the state, with lows in the upper 30s and lower 40s. The cooldown is brief, as temperatures begin to warm back up into next week.