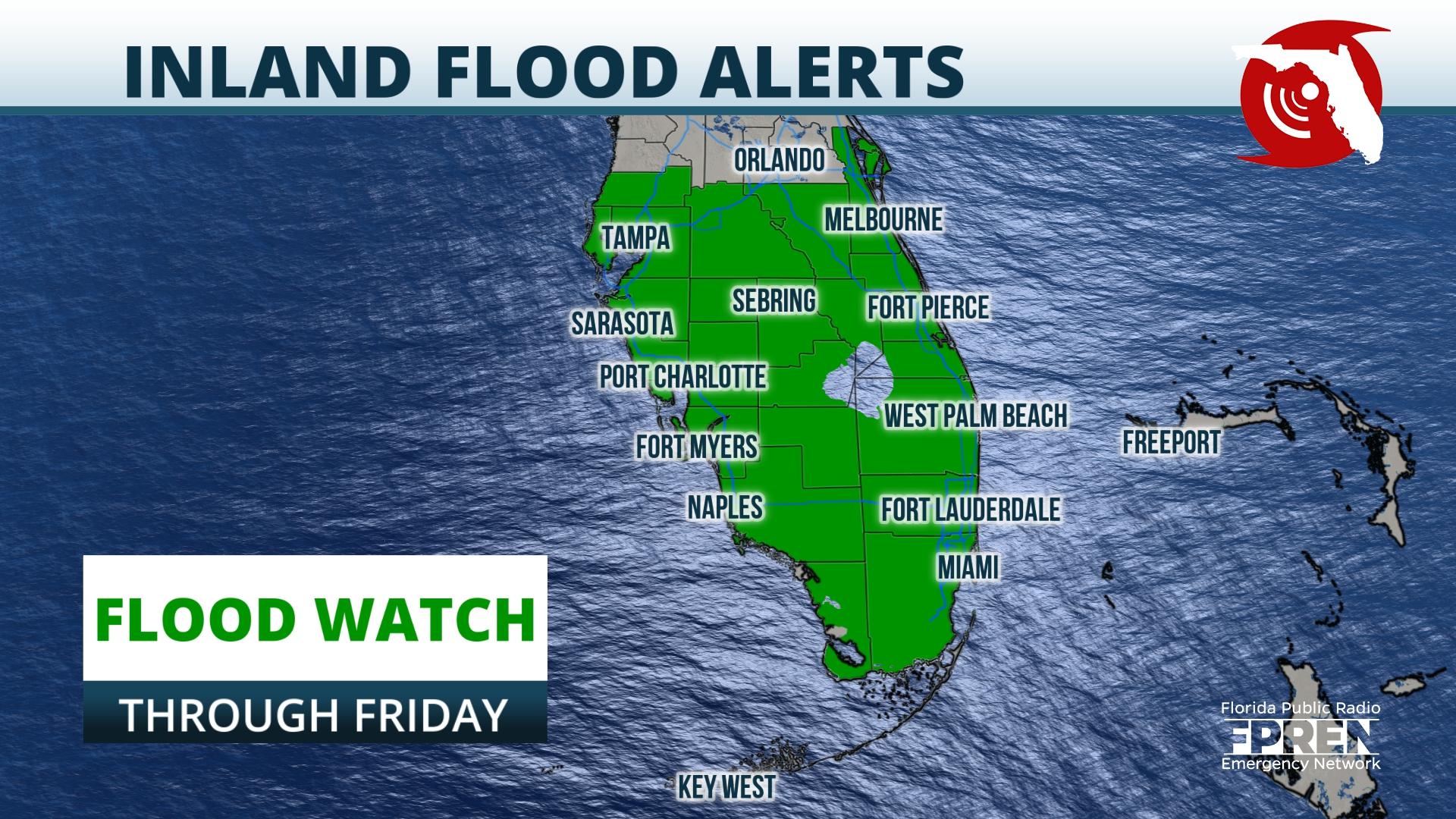 A Flood Watch is in effect through Friday morning for South Florida and through Saturday afternoon for South-Central parts of the Sunshine State.

The Weather Prediction Center has given a marginal risk of excessive rainfall across much of the Florida Peninsula as abundant amount of tropical moisture is expected to continue to stream in from the southwest through the weekend and into the early part of next week. Tropical Storm Cristobal is expect to move northward away from the Yucatán Peninsula and into the Gulf of Mexico beginning Friday which will aid in pushing more moisture into the Sunshine State through the next several days.

Widespread showers and isolated thunderstorms have the potential to deliver locally heavy rainfall which may trigger flash flooding in some areas. South Florida could see an additional 1 to 3 inches of rainfall with locally higher amount possible. Western parts of the state, including the Florida Panhandle, could see rainfall amounts total 4 to 5 inches through the weekend as Cristobal moves north towards the central Gulf Coast states.

Tropical Storm Cristobal is not expected to make landfall in Florida, but its nearby moisture will produce several inches of rain over multiple days across the Sunshine State.

The downpours began Wednesday across much of Southwest Florida, then began spreading north into the Tampa Bay metro area by evening.

Tropical Storm Cristobal made landfall in the State of Campeche of southeast Mexico Wednesday. Deadly flash flooding has been reported the past few days across portions of Central American and portions of the Yucatán Peninsula.

There are no coastal watches or warnings in effect.

At 300 PM GMT (1500 UTC), the center of Post Tropical Cyclone Wanda was located near latitude 40.2 North, longitude 33.5 West. The post tropical cyclone is moving toward the northeast near 25 mph (41 km/h) and this motion is expected to continue with further acceleration through Monday. Maximum sustained winds are near 40 mph (65 km/h) with higher gusts. The post tropical cyclone is forecast to merge with a frontal system tonight and dissipate by Monday.

Cristobal is expected to remain near-stationary through Thursday, possibly weakening to a tropical depression, before moving northward Friday and entering into the Gulf of Mexico this weekend. Forecasters at the National Hurricane Center say it could make landfall in Louisiana late Sunday or early Monday.

While the center of Tropical Storm Cristobal is currently expected to stay west of Florida, the large circulation surrounding it will send waves of tropical moisture from the Gulf of Mexico across the state, triggering numerous rounds of showers and some thunderstorms through at least Monday.

The heaviest rain is likely to fall near and just inland from the Gulf Coast, from Pensacola to Tampa, where at least 4 to 5 inches may accumulate over the next five days. Locally higher amounts will be possible in some areas, especially where some of the outer bands of Tropical Storm Cristobal set up when the storm is at its nearest point Sunday. Rainfall amounts across the rest of the state will generally be in the 2 to 4-inch range across the rest of the peninsula, with potentially lower amounts along the Atlantic Coast from Cape Canaveral to Miami.

The heaviest and most widespread rainfall associated with the circulation from Tropical Storm Cristobal is expected to subside by late Monday. However, the wet weather pattern may last well into next week, but potentially from another weather feature or from the afternoon sea breezes.